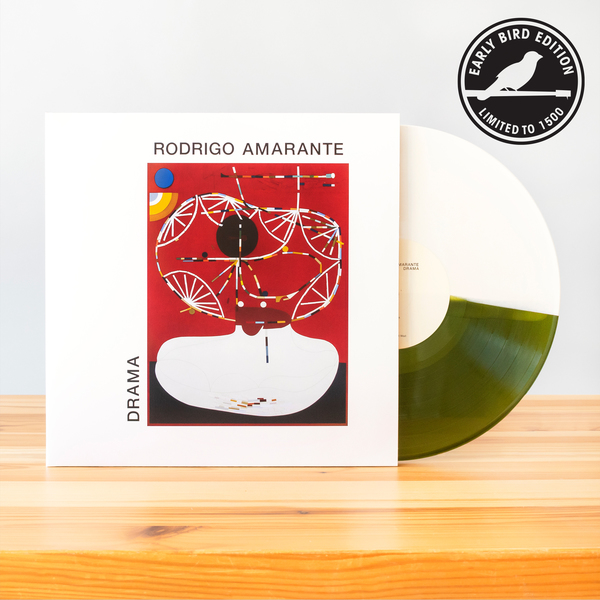 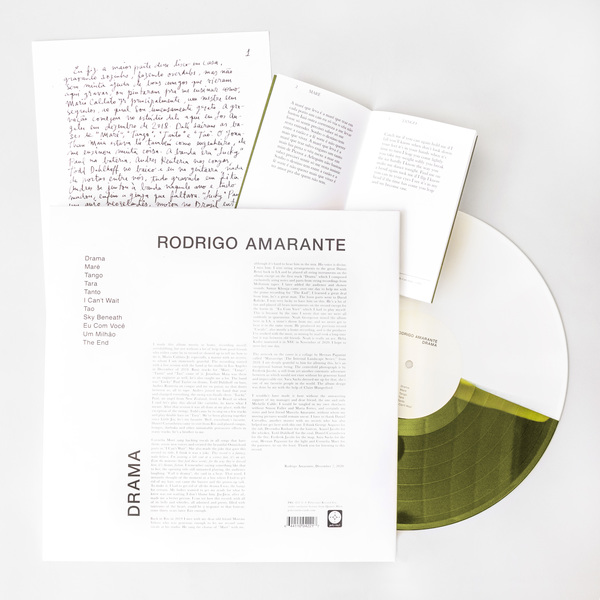 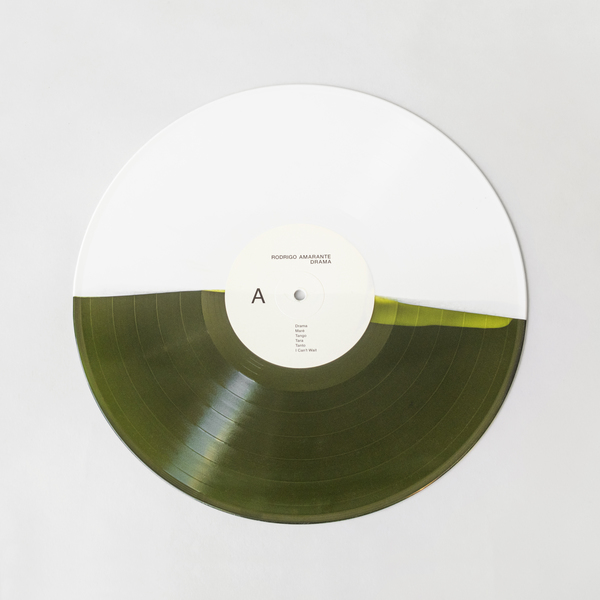 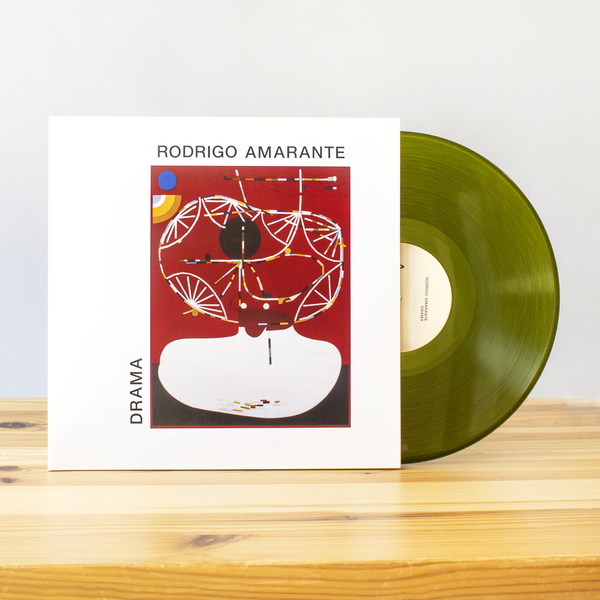 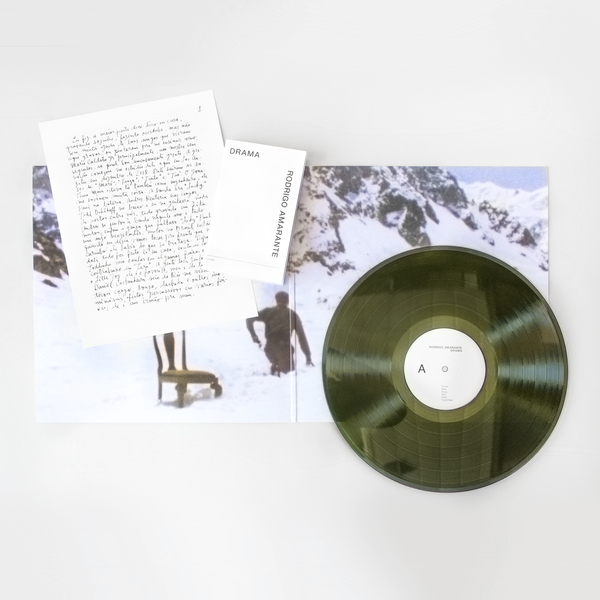 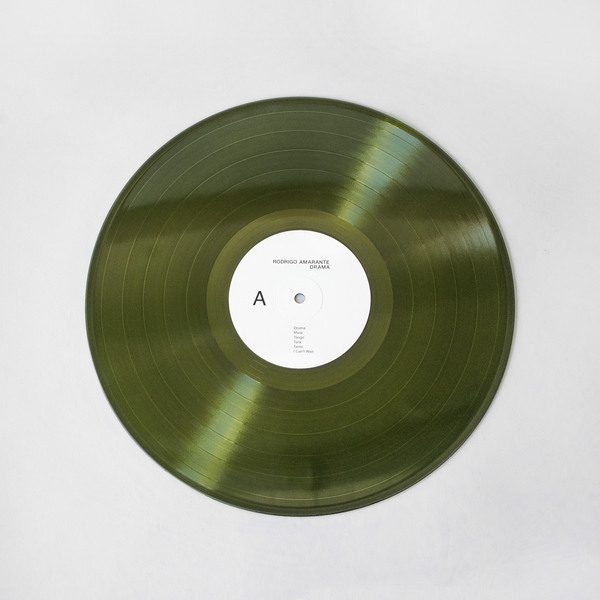 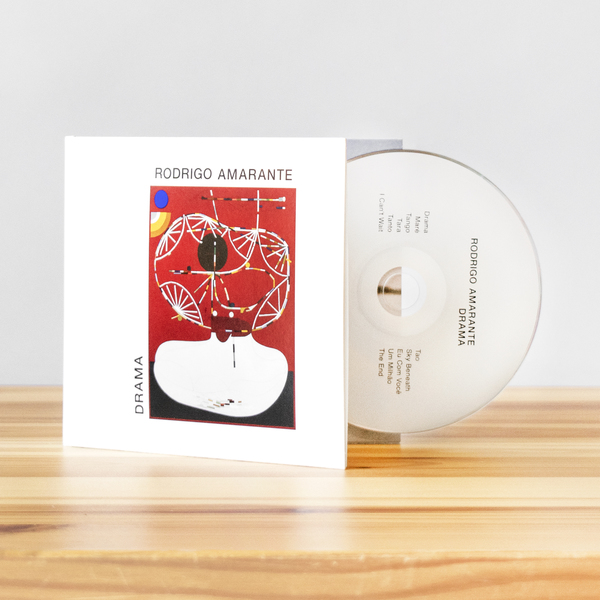 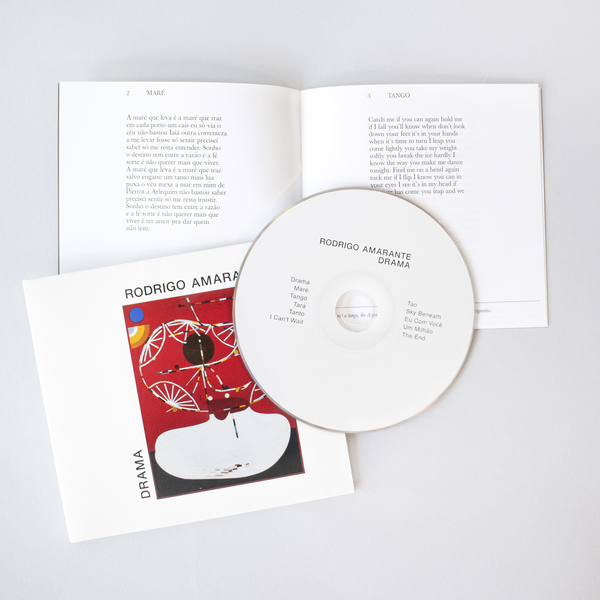 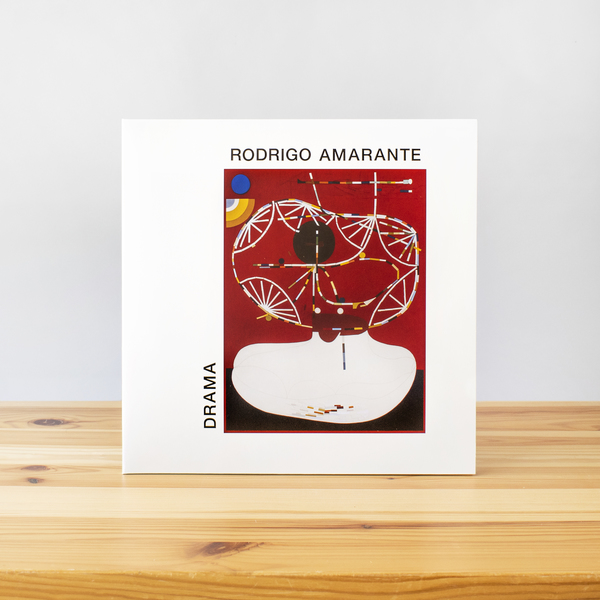 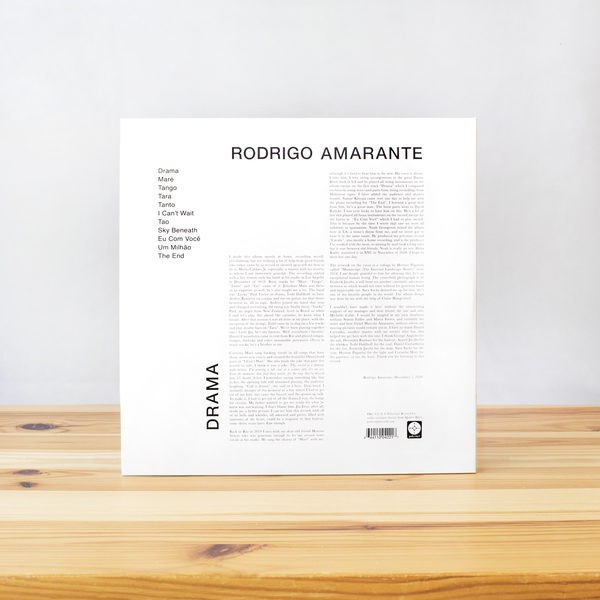 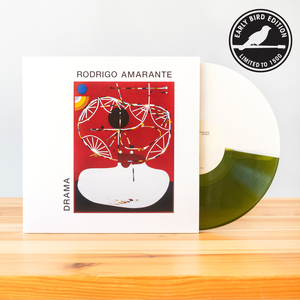 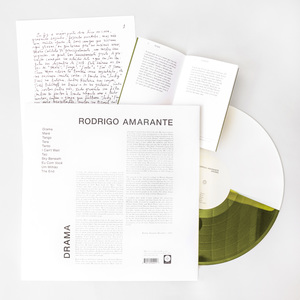 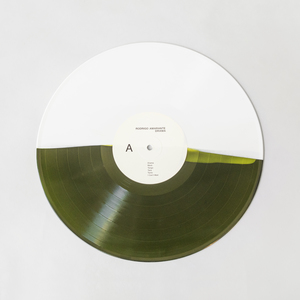 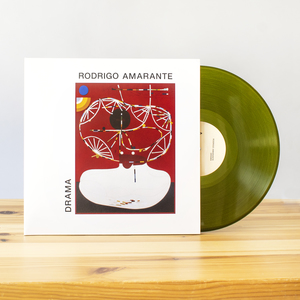 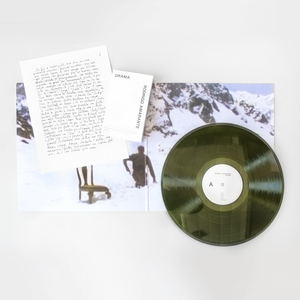 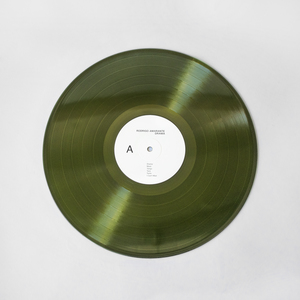 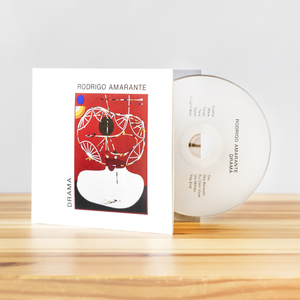 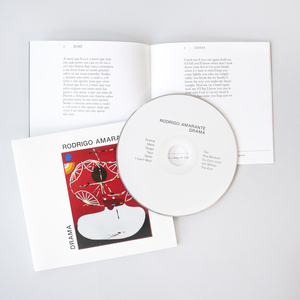 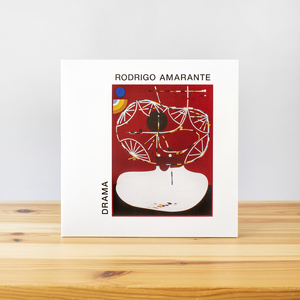 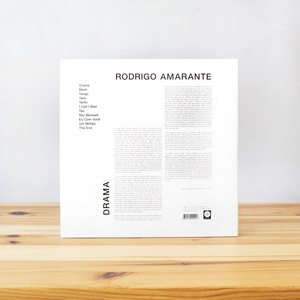 I was told there was a bio written for me, to promote my new record Drama, and that I should review it. It wasn’t news from outer space but it caught me off guard, like a friendly dental appointment reminder. My line of work involves cringeworthy tasks at times, at least this was one I could do in private, secretly. But the tone, a sort of resumé oozing enthusiasm, reminded me of my early days of crossing the US border coming from Brazil for hire. I was smiley and unintentionally talkative, just very friendly, thinking I could charm the officer out of inviting me to a further exchange in an adjacent room. My jolliness only served the purpose of displaying my fear of law enforcement, the fragility of my immigration status and instability of my line of work. I would be wearing my reading glasses.

Officer: What kind of music?

Me: Oh, well, how should I put it? ...You see officer, I'm from Brazil, Rio de Janeiro, and I grew up in a samba school – a school in the sense of a school of fish, you know, because we parade during carnaval, kinda like fish do, all up against each other going whatever the others do. A strange thing that in English they’re the same words isn’t it, a collective for fish and students? What I mean is that this school isn’t an educational institution, although it was a school to me in that sense as well. In any case, to answer your question, my music isn’t typically Brazilian per se but that sound I grew up with comes through even when I’m writing in a different style, say a waltz, those polyrhythms, jazzy chords, they sneak in. The thing is, (sigh) …even though I loved bossa-nova and samba as a kid, I really wanted to be Johnny Marr when I first picked up the guitar, from The Smiths? You know The Smiths, officer?

I would give the officer no option other than to despise me and hand me over to his colleague with the rubber gloves. Here's how this exchange currently plays out:

Officer: What kind of music?

I eventually stopped smiling at border patrol officers and TSA personnel like Alice arriving in Wonderland. I can’t blame them for considering it suspicious behavior to be in excellent spirits after 19 hours strapped in a cold barrel with tins of dog food, not to mention the bouquet. I should have listened to my father on that one. "Be straight, they don't go on hugging the milkmen like we do." We didn't have milkmen, my dad didn’t say quite that. Milkmen are a thing of old American films for me, but thinking in English brings the target language’s imagery, it’s a funny thing. In any case, the bio felt to me a bit like the smiley period of border crossing. I’ll give it to you:

“You may know Rodrigo Amarante already. You may have heard “Tuyo,” his theme tune to the Netflix drama Narcos, or the Little Joy album, recorded with Fab Moretti and Binki Shapiro, you might have noted his name among the credits on songs by Gal Costa, Norah Jones and Gilberto Gil; or perhaps you saw him play live with Brazilian samba big band Orquestra Imperial, or with Rio rockers Los Hermanos; you really should have heard his debut album, Cavalo, released in 2014. You may think you know Rodrigo Amarante already, but Drama, his second solo album, is going to introduce a whole new level of confusion to the mix.”

I get it, how else does one introduce someone in my position, promoting new material with a considerable potential of anonymity, other than listing their most notable accomplishments? A bit of a general’s chest plate there but, alright.

“Born in Rio de Janeiro in 1976, Rodrigo points to two incidents in his past that fed directly into the recordings: a childhood illness that makes him appreciate the beauty of the second chance; and that moment when his father tried to prepare his son for the real world – eliminating all the drama and sensitivity from the young man’s life – by cutting off his long hair.”

The haircut, I must say, wasn't exactly forceful, I wasn't held by elders of the clan in tears or anything. I wanted to be what my dad wanted me to be, and he had a point: the bangs were too sweet and the streets were making a mess out of me weekly. He had my consent. I did think of that haircut when I decided the record was called Drama, what I believe that moment represents. That word was a trigger – the same word in Portuguese – and I had to embrace it, since I’m carrying it anyway. Drama was what had to go, or be concealed. Truth is, I hated the haircut, I learned how to look tough but I felt ugly.

Now, I did mention these two events when talking about making the record and it’s true they’re both significant to me, but in different contexts, we’ve got to slow this down here. For one, mentioning a childhood illness in passing is no pickup line. What is this, a pitch for charity? This has to feel like an invitation, not an invoice. I’ve got to cut that out. For another, nothing really “feeds directly into the recording”; that’s precisely the point in calling it Drama. Between events I’ve lived and songs I write there is me, the middlemen; a corrupt reporter with tampered evidence, a censor really, even if unwittingly. We talk about connecting the dots but I think of memory more as a coloring book.

The point is, no matter how genuine I strive to be, there is always a tale I’m hung up on. The beauty and humor in that, the release in playing it out without prejudice, embracing the incoherence and hyperbole of memory instead of forging a reasonable amalgam; that is a wonderful instrument, one filled with music. It feels relaxing to abandon the illusion of verisimilitude and bring forth the confusion and contradiction of what I have to work with, these tales. That is the sound of Drama. Dressing up as means to reveal, rather than dressing down, to conceal. Tickling memory into confession, seeing through the eye holes of a mask. This feels like a concept I followed but that isn’t so. It came as a posthumous realization, as it often happens with me. These songs were the instruments to realize it, not the other way around.

Now that I’ve let it out, had a couple of drags, I feel more at ease. Besides, I was told that something should be said about the music itself, how it sounds, and that is not my area of expertise, so I’m going to hand back to the biographer now and try not to interrupt again...

Drama began life at the end of 2018, with a session involving Rodrigo’s regular band - “Lucky” Paul Taylor on drums, bassist Todd Dahlhoff, Andres Renteria on congas, and Amarante on guitar – resulting in four tracks – “Maré,” “Tango,” “Tanto,” “Tao” – that would make the final cut. An upbeat, seemingly happy song with darker aspects hidden beneath the surface, “Maré” is based on Spanish proverb: the tide will fetch what the ebb brings. “Things that arrive in your hand by destiny, they are just as easily swept away,” explains the writer.

“Tango,” though, may be the key to the theme of the album: Rodrigo falls in love on the dance floor, the lovers sway clumsily until they adjust their balance, become familiar with the other’s steps and, at last, become one. The melody is buttery and the arrangement is accommodating, but don’t be taken in. It’s a song about a relationship disguised as a partner dancing lesson, a song about needing support, struggling with voicing that, and eventually finding it.

Also dating from the 2018 sessions, “Tao” is a different beast entirely. “It’s the ridiculousness of the human condition. Suffering comes from being attached to something, I’m like: “OK, detach, that’s all good... but there’s this girl, I can’t get her out of my head.” It's a disguised comedy, very much inspired by Alan Watts, the Taoist philosopher. I would have never written this song without his sense of humor.” Midway through, however, the groove kicks in and you’re in the studio with The Rolling Stones in 1971, their brass players, Bobby Keys and Jim Price (both played, like most of the horns, by David Ralicke), cooking up a mesmerizing gumbo.

“Tara,” meanwhile, feels like something Astrud Gilberto might have sung at the height of bossa nova’s global popularity. There’s a beautiful string arrangement, upright bass, a smooth tenor sax reminiscent of Stan Getz, but with the twist of the big-band-era muted horns on the chorus, nearly self-deprecating, as if mocking such idealized infatuation.

Writing and recording continued through 2019. Some songs were pulled out from the back of drawers, more ideas came anew. “”The End,” I think I started writing that 10 years ago. Other songs went into the trash bin, but I’ll be sniffing about in there for the next record. “Sky Beneath” was a quick one because of the emotional state I was in, it was one of those. I wrote that as a folk song, arranged it with the African polyrhythm, then the Central America guitar section, then violins... A friend told me it’s like that “I’d Like To Teach The World To Sing” commercial for Coca-Cola. I absolutely disagree.”

“I Can’t Wait” took on the eerie qualities of a John Barry theme, while still ruminating on the power of love. To be free is to belong. “That song will throw some people off. There are records that are like a box of attempts at the hit single – some great records are like that – but every song is trying to achieve the same kind of thing. I admire such focus but I simply can't do that. And now I’ve said that, “I Can’t Wait” will definitely be a single.”

In early 2020, with the album not quite ready, lockdown hit Los Angeles and Rodrigo found himself alone, adding overdubs – inexplicably, he’s not overly proud of his horn playing on “Eu Com Você” – and mixing the completed tracks with Noah Georgeson, though the two were never in the same room. Unsurprisingly, isolation dictated the sound of the album. “Lockdown and limitation have produced some great ideas. I started the album wanting to be the man I was supposed to be when my father tried to empty my head of all my drama. I planned to focus on rhythm and abandon those rich Brazilian harmonic traditions, the rich chord progressions and modulations I inherited. Instead, I embraced the complications I’ve inherited.”

Drama closes with the piano on “The End.” ‘To live is to fall.’ After all the emotional upheavals the singer has put his cast through, is this some kind of farewell to this mortal coil? “Everything furthers,” says Amarante, and adds: “Staring at the absurd while remaining kind, being open to the gifts of confusion; that's why we create these tools that are stories and songs, to help us see each other.”

To be fair, given how delicious a squid popsicle can get, this bio wasn’t that bad. It had clever moments and it was quite sensitive to the material at times. Remember though, if any quotes stood out to you, that wasn't me simply talking to you now, but a pre-recorded message. Just a heads up.

I dearly hope you enjoy these songs.