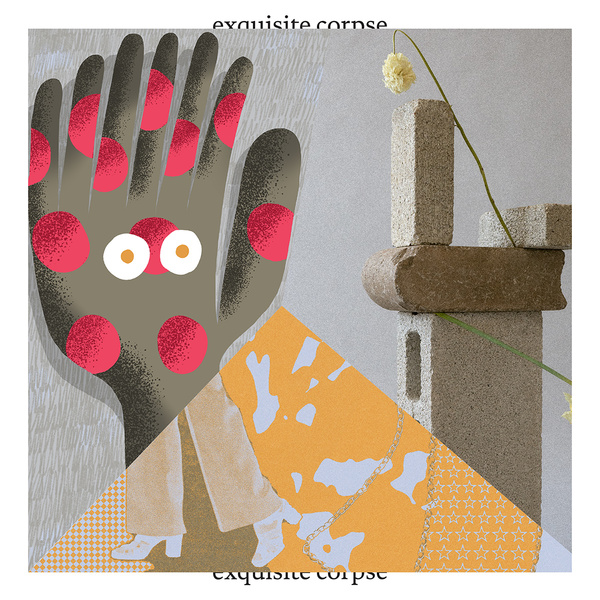 2020 has been an intense year by any standard, with the first weeks of the global pandemic giving most of us feelings unlike anything we’d experienced before. Quarantine lockdowns and hovering dread shifted the fabric of time in a way that’s ongoing, but was at its most vivid in those early days when a new reality was sinking in. Before people eventually adapted and started using the newly mandatory downtime to learn new languages and bake bread, hours lurched by as the world sat restlessly indoors. All the shows were slowly cancelled one by one, the tours and recording sessions were scrapped, hangs and practices just stopped happening. Everything was on hold indefinitely, time lost meaning, every day felt unreal.

During the first days of lockdown, Rainer Maria’s Kaia Fischer came up with the concept of Exquisite Corpse by meditating on their perspective of the newly unfolding weirdness they and so many of their creative friends were going through. Obviously a deadly pandemic was wrought with negatives, and those in particular to independent music scenes were especially devastating. But could there be another side to what felt so all-consumingly terrible? “We know what the pandemic isn’t good for,” Fischer said, “but let’s find out what it is good for.”

Searching for silver linings in the earliest days of lockdown wasn’t easy, but one idea led to another. It began with the realization that every Polyvinyl artist now had a completely clear schedule at the same time. They were also mostly sitting around waiting for the storm to pass, in different states of boredom, anxiety, worry and malaise. Logistically speaking, there might not be another time when pretty much everyone was available for a collaborative project and needed something to occupy their frazzled minds. A round of emails went out explaining the project and inviting members of the Polyvinyl roster to participate. Eleven teams of four or five musicians were assembled more or less at random, bringing together artists that had in many cases never met, much less worked on music together. Remotely, each team worked from scratch to create an original song, a reworked sonic adaptation of the game where each player adds to a collaborative drawing.

The scope alone is exciting, with these 11 songs combining the talents of 47 musicians from all corners of the world and all ends of the Polyvinyl family tree. Even the artwork was assembled through remote collaboration, with visual artists from Chicago, Minneapolis, and Seattle collaborating on the design in true Exquisite Corpse fashion. Musically, the results are every bit as exciting and unpredictable as the concept envisioned. New creative chemistries between the different artists and a complete absence of expectations or precedent sounds made for fearless choices in production, genre experimentation and stylistic curveballs. Artists known for sparkling pop worked with more ragged rockers or folks from acoustic-leaning emo bands, and the end results almost always defied the expected sum of their parts. Even though Exquisite Corpse is timestamped with traces of the overwhelming uncertainty that colored the pandemic’s onset, the music is by-and-large joyful, daring, and fun. More than reflecting the hanging gloom of the non-stop news cycle and spiking graphs, artists tapped into expressions of hope and exploration. This moment of universal upheaval cast a shadow on the entire world, but also allowed for a meeting of minds that was truly unprecedented.

Most indie labels share some degree of familial connection, but Polyvinyl is built on that feeling of family. The label was born in the late ‘90s out of the closely knit regional diy scenes of the Midwest, and every aspect of growth since has been informed by the earnest connectivity of those early days. Polyvinyl bands go on tour together, collaborate regularly and exist within a framework facilitated by the label that values friendship and the sharing of ideas above all else. These songs zoom in on that spirit of kinship and community. Exquisite Corpse is a real-time experiment with some incredible outcomes, creating a space for Polyvinyl’s wide-ranging talents to come together and make something beautiful during a dark time.